Innocence is Questionable: Escondido Center for the Arts, CA

The work consist of an installation, sculptures and mixed media drawings/Collages. 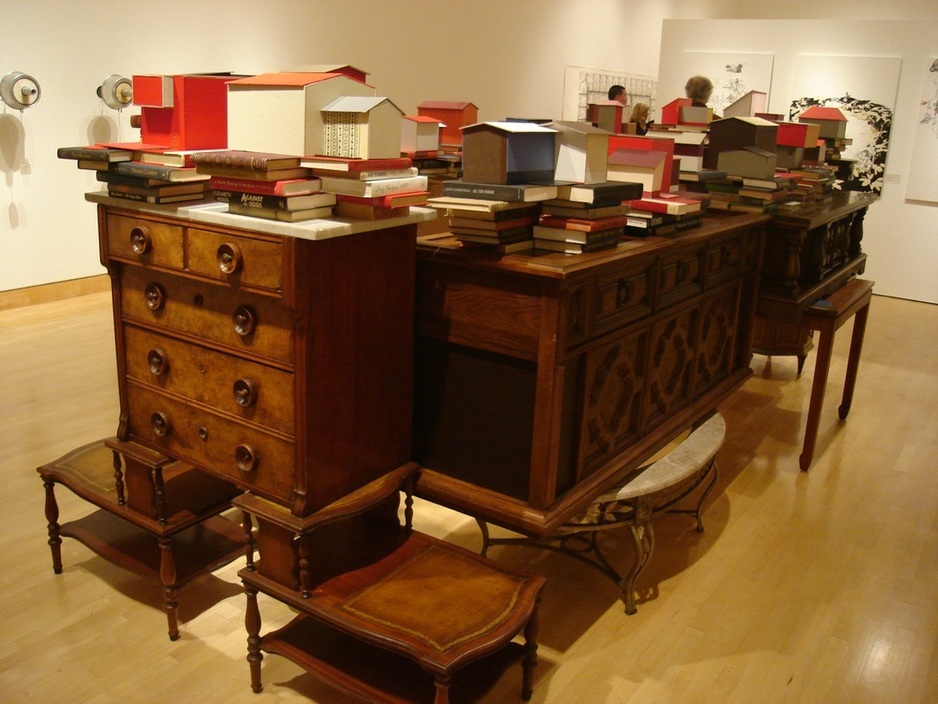 Stacked Forms - Furniture, books and houses made out of book covers 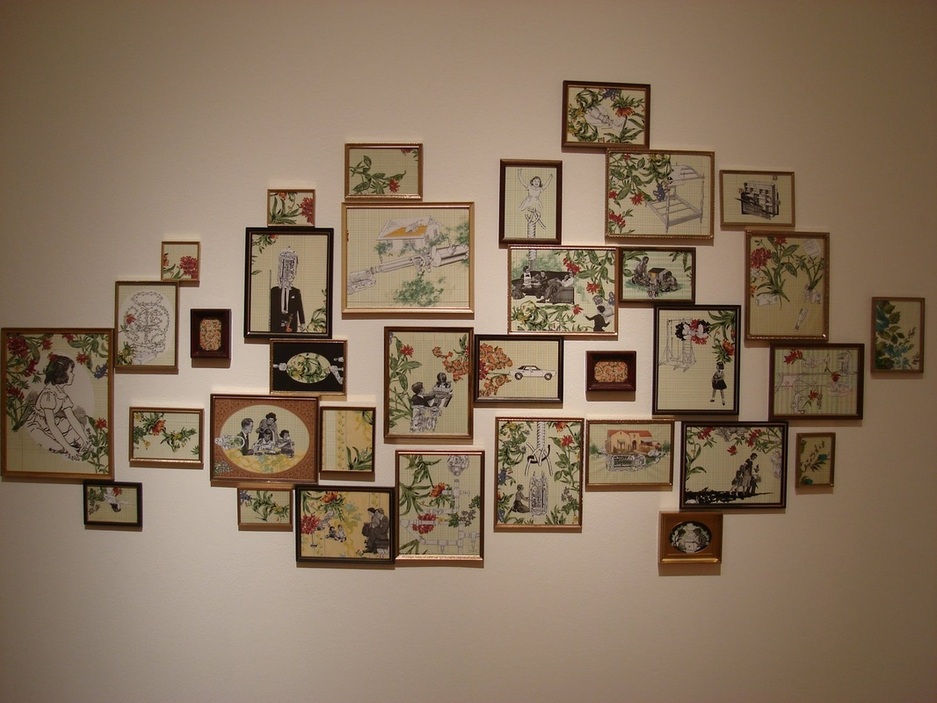 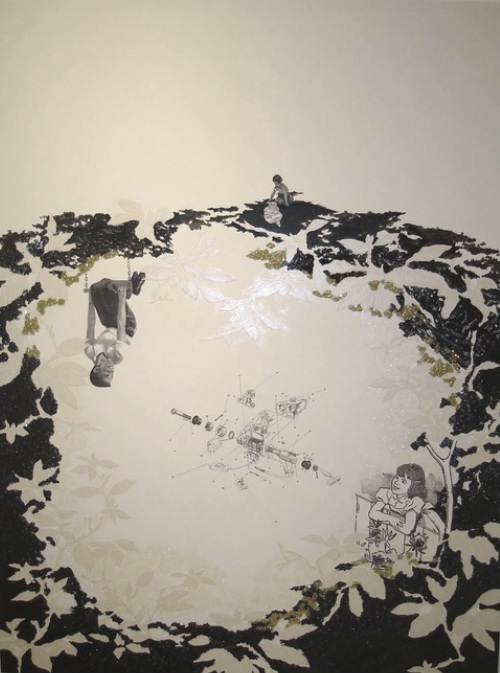 The familiar banality of suburban landscapes is a common thread linking collections from six San Diego-area artists in this spring's “Innocence Is Questionable” exhibit at the California Center for the Arts, Escondido.

The exhibit, which opened March 1 and runs through May 31, includes work from Raul Guerrero, Jean Lowe, May-Ling Martinez, Iana Quesnell, Ernest Silva and Yvonne Venegas. Each is a recipient of the San Diego Art Prize for 2006-07 .

“There is an element of social critique in the work of all six of us; in that regard, that's a pretty apt thread,” Lowe said.

In her “Empire Style” installation, ornate, 3-D furnishings are juxtaposed against a large mural with Target, Starbucks, Gap and Pizza Hut stores painted on it.

“I think my point with that is just kind of in a visually seductive way to make a conversation about the homogenization of our landscape, the new empire as corporate and power,” Lowe said.

Martinez, who lives in Chula Vista, uses ordinary found objects to create collages. In her “Stacked Forms” installation, tables are stacked to create a topsy-turvy, Alice In Wonderland-like structure topped with piles of hardbound books and what look like unfinished dollhouses.

“It's all about this suburban mentality,” said Martinez, who emigrated from Puerto Rico 10 years ago. “You see images in a book, with a man and the housewife and the kids. That's very iconic, and I cannot say I completely criticize that. We all in a way want that: to be successful, comfortable, to feel accomplished. But at the same time, maybe if the image in your mind is so idealized, you feel you can never get there.”

Her “La Casa Segura” looks like an architect's bird's-eye-view blueprint of a home, but viewers can discern details such as an unmade bed, fruit bowl, laptop computer and dishes drying in a rack.

“People want to know why the blueprint, why the aerial view, did you get this off of Google,” said Quesnell, who has moved from La Jolla to Tijuana. “By centering on what I own, everything that physically exists within my house is a branch into another topic. My work is a systems analysis. I feel strongly about analyzing your situation in terms of occupying spaces.”

San Diego artist Ernest Silva's illustrations of families look like characters from 1950's-era storybooks: coiffed and wasp-waisted mothers with tidy, eager children engaged in wholesome activities like reading books before a fire. But flaming trees, antlered deer and ax-wielding men in the background suggest that the issue of resolving nature with civilization still looms.

Finally, a series of photographs from San Diego artist Yvonne Venegas portrays the daily life of the wealthy Tijuana-based Elvia de Hank family. In one photo, ducks and geese bathe in a small man-made lagoon surrounded by chain-link fencing, with high-rise buildings in the smoggy distance. In “Señoras,” stylish women socialize at a formal dining table, wielding champagne flutes with manicured hands.

Five of the six artists are connected to the Visual Arts Department at the University of California San Diego: Guerrero, Lowe and Silva are lecturers, Quesnell and Venegas are graduate students. Just coincidence, says Patricia Frischer, coordinator of the San Diego Visual Arts Network.

Frischer said that nominations came from leaders within the San Diego visual arts community, and that selections were made with the idea of recognizing artists from different backgrounds, different mediums and different parts of the county.

“One of our missions is to be inclusive of the entire San Diego region,” Frischer said. “We very much wanted to have a northern venue and that's why we approached the California Center for the Arts. Of course, they saw the excellence of the artists and became excited about giving a magnificent space.”